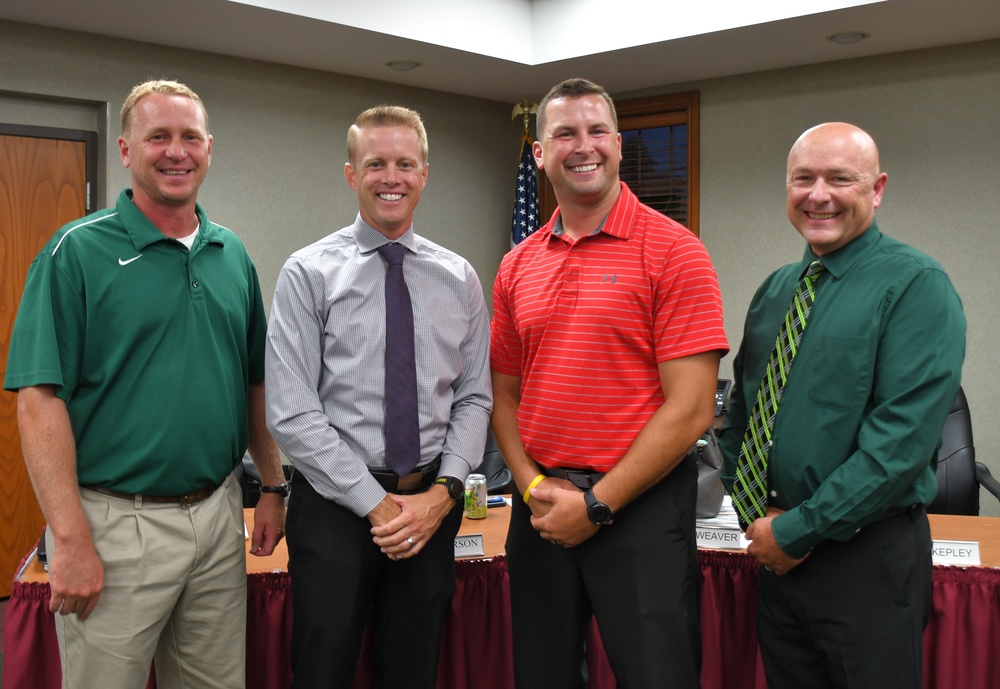 The Mattoon school board selected McLain Schaefer as director of the new regional innovation center known as LIFT (Leaders Innovating for Tomorrow).   LIFT will be located in the former Consolidated Communications Building at 121 S. 17th Street.

McLain Shaefer will begin his new role as director of the LIFT program in the fall of 2022 when the program is slated to open.  Schafer currently serves as principal of Arland D. Williams Jr. Elementary School and was formerly a social science teacher at Mattoon High School.

Schaefer is looking forward to serving as director of this new program.

“The opportunity to be a part of something so great for our students, our community, and our region is humbling, to say the least,” said Schaefer.  “My core values revolve around leadership, positivity, and service.  We are committed to making LIFT a place where students will gain life-ready skills in the area of leadership and career-specific certificates, accreditations, and college credits.  Continuing to work with our regional schools, industry leaders, and higher ed. partners will be a major focus moving forward.  Ensuring we are always offering the highest-demand and most cutting-edge programs and courses and ensuring those courses are accessible to our region's schools will be paramount.”

Schaefer grew up in Charleston and is a 2003 graduate of Charleston High School.  While in high school, Schafer joined the Illinois Army National Guard as a Military Police Officer.  During his six years of service, he spent one and half years on active duty stationed at Fort Carson, Colorado.  Schaefer obtained his veteran status by serving as part of Operation Noble Eagle.  Upon his return from active duty, Schaefer enrolled at Eastern Illinois University for his undergrad as a social science teacher.

He began his career in education in 2009 when he was hired by Mattoon High School as a social science teacher.  During his eight years as a teacher and coach at MHS, he began his journey into higher education receiving his Masters in Administration in 2012, his Specialist/Superintendency in 2017, and is currently completing his doctorate work through Illinois State University.

In July of 2017, Schaefer took his next step in leadership as assistant principal of Effingham High School where he served the students and staff for one year.   He returned to Mattoon to serve as principal of Williams Elementary School.

Although Shaefer is excited about his new role as director of LIFT, he will miss the students and staff at WES.

“Williams is a special place,” said Schaefer.  “I've been through a lot and learned even more with the staff, students, and families of Williams.  My own kids attend Williams and deciding to leave WES to serve our community and region at LIFT was not easy.  I have a saying that I use to close most communication with staff and families at Williams, "Keep being AWESOME."  If I have learned anything from the amazing people at WES it's that being AWESOME is not easy.  I've learned that being AWESOME takes consistency, tenacity, determination, a little bit of stubbornness, and a whole lot of love.  The amazing staff, students, and families of Williams Elementary are without question, AWESOME and have helped me become a better version of myself.  Let's do this!"

McLain and his wife Kyndy have two children Dayley and Maverick.

Mike Shaffer was selected by the Mattoon school board to serve as the next principal of Arland D. Williams Jr. Elementary School starting in the fall of 2022.  Shaffer currently serves as assistant principal of Mattoon High School.

Shaffer said his new role as principal will give him the opportunity to collaborate with staff and building administrators at both WES and Riddle.

“I am very excited and humbled by the opportunity to work with the outstanding staff at Arland E. Williams Jr. Elementary,” said Shaffer.  “Principal McLain Schaefer,  Assistant Principal Becca Kraft, their teachers and support staff continue to do a fantastic job of creating learning opportunities and experiences for our district’s students.  I know that these same values are shared by Principal Chad Arnold, Assistant Principal Jordan Rahar, and the staff at our sister school Riddle Elementary.  I look forward to working with Williams Elementary staff along with Mr. Arnold and his staff, to continue building upon the excellent opportunities that they have created for all MCUSD2 elementary students.”

Shaffer has served 28 years in education, beginning at Mattoon High School in the fall of 1993.  He worked for 15 years as a mathematics teacher and coach and 13 years as an assistant principal beginning in the fall of 2008.  Prior to working at MHS, he worked as a long term substitute for several school districts from the spring of 1992 through the spring of 1993 while working full time in the lumber milling industry.

Shaffer earned his BA in mathematics education from the University of Northern Iowa and an MS in Education Administration from Eastern Illinois University.

Although Shaffer will be working with a much younger age group of students at WES, he believes there are commonalities among all students.

“I choose to focus on the similarities between the two age groups and the common vision that all of our MCUSD2 schools share for our students,” said Shaffer. “We want to provide our students with the best learning opportunities possible and support their future goals and aspirations.  This leadership opportunity is really not about me.  This mindset and its importance is much larger than any one individual in our district.  It is about providing students with exceptional opportunities to learn and grow. It is about recruiting, improving, and retaining excellent staff members that share a common commitment to our students.  It is about building an outstanding learning culture dedicated to the support of our students.”

During his tenure at MHS, he  has worked with staff on Positive Behavior Interventions and Supports (P.B.I.S.).  He fostered student leadership for MHS student, Luke Young, by supporting the development of a Luke’s dream to create the Helping Encouraging and Responding to Others through Service program (H.E.R.O.S. - also known as purple service cord at graduation program).  He collaborated with staff, administrators, and the Board of Education to develop and create the MHS Credit Recovery Program (C.R.P.).  Shaffer’s synergetic work with MHS Principal Rich Stuart and C.R.P. teacher Laurie Dotson has further evolved the C.R.P. program into the Facilitated Learning and Extensive services program (F.L.E.X.-named by the program’s students).  This program expanded services and opportunities by adding student support for social and emotional growth, reintegration from alternative programs, and out-of-state transfer students where credit requirements are different from those in Illinois.  Additionally, F.L.E.X. has supported students who have proceeded into careers while still in high school.  Shaffer is currently working with administrators, regular educators and special educators as Mattoon High School transforms its special needs service model to create more opportunities for all students.  Additionally, Shaffer actively supports the Believe It Or Not I Care (B.I.O.N.I.C) student mentoring program, and the District Leader In Me (LIM) and Competency Based Education initiatives.

With his connections at the high school, Shaffer is hopeful he will be able to continue to create more opportunities for high school students and k-5 students to collaborate.

“We will always value connectivity between our students and schools,” said Shaffer. “ I know first hand that MHS Principal Richard Stuart and his staff feel the same.  There is so much to gain from these relationships for our students.  For our older students there are leadership and mentorship learning opportunities.  For our younger students there are opportunities to learn from those leaders and mentors while gaining from their experiences.  When you support these opportunities with a great curriculum the value of these connections greatly increases.”

Shaffer and his wife Kathy have been married for more than 30 years and have two daughters Cassandra and Megan.

Trent Duckett will serve as the next Mattoon High School athletic director starting in the fall of 2022.   He currently is employed as the principal of St. John’s Lutheran School.

Current MHS Athletic Director Dave Vieth announced he will be retiring at the end of the 2021-2022 school year.

The new role as athletic director will be a homecoming for Duckett who formerly taught social science at Mattoon High School.

I am very excited about the opportunity to return to the place where I started my career in education,” said Duckett.  “I will get to work with a great staff and administration.”

The district recently announced they had secured a $2 million state grant for improvements to MHS sports facilities.  Duckett is looking forward to assisting with those renovations and seeing their completion when he begins as athletic director next fall.

Duckett has viewed the preliminary plans and views the project as a gain for the students and community.  He is looking forward to the task of scheduling tournaments, invitationals and state competitions at the new facilities.

Duckett is a 2005 graduate of Shelbyville High School and a 2009 graduate of Concordia University Wisconsin where he earned a BA in secondary education/history.  He worked as a social science teacher at Mattoon High School from 2009-2015.  He was an assistant football coach for six years, junior varsity softball coach for three years and varsity head softball coach for two years.  He earned his Masters Degree at EIU in Education Administration in 2012.  In 2015, he earned his Specialists Degree in Education from EIU.

“I will definitely miss the staff, the families and the students,” said Duckett. “That’s the hardest part of leaving.  The staff is great.   I will miss the opportunity to be a role model of faith and miss sharing my faith as openly as I could but I will carry those same Christian values with me into my new work.”

Duckett and his wife Cayla, also from Shelbyville, have been married since 2009. Cayla has worked as a sixth grade math teacher at Mattoon Middle School for 13 years. The Ducketts have twin 8-year-old daughters, Marlee and Mallory, and a 2-year-old son named Tyce.

“I look forward to working with the administrative team to provide opportunities for all of the students in the district,” said Ghere of his upcoming new role.  “I will miss working with kids on a daily basis and being a teacher and mentor to them.  The good thing is that I have two more years of teaching and coaching before I start this new endeavor.”

His teaching experience includes Willowbrook High School from 1997-1998.  He returned home to Mattoon to continue his teaching career starting at the middle school from 1998-1999 and also serve as boys varsity soccer coach.   In 1999, he began teaching at MHS.  Ghere continued coaching varsity boys soccer and then became the girls varsity soccer coach in 2001.  He became the varsity basketball coach in 2017.

His teaching awards include:

2001 Decatur Herald and Review Boys Soccer Coach of the Year

2003 Decatur Herald and Review Girls Soccer Coach of the Year

2012 Decatur Herald and Review Boys Soccer Coach of the Year

He is married to Lori Ghere who is a kindergarten teacher at Riddle Elementary School.  Their children include Jake, Shane, Lily, and Maggie Ghere.