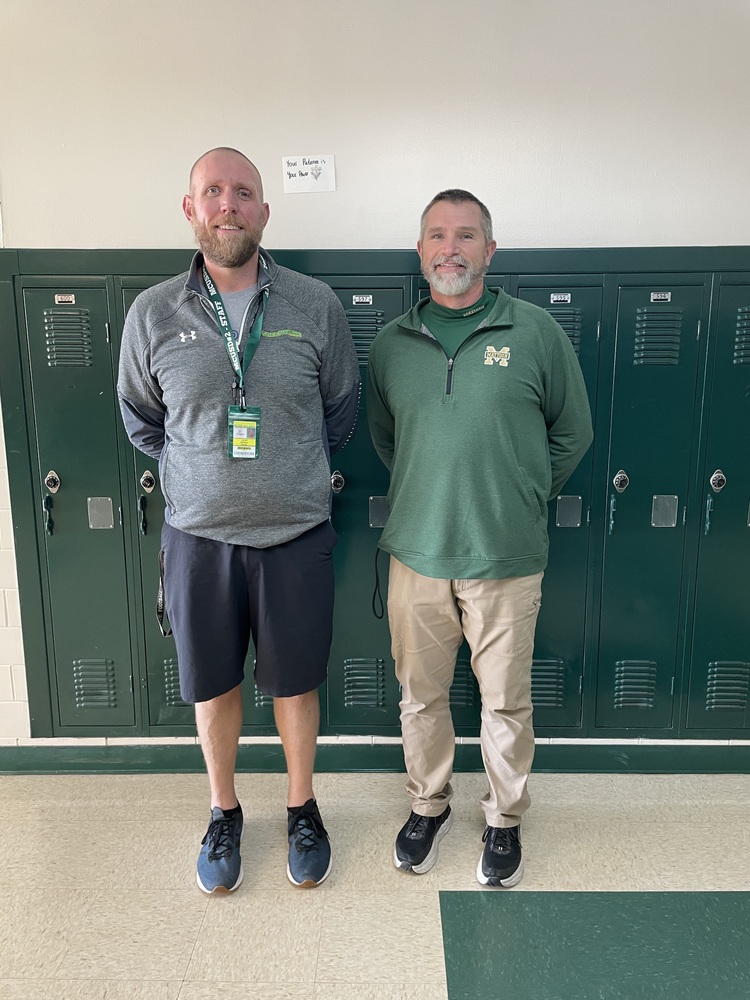 Retiring Greenwave head football coach Troy Johnson praised his successor Jarad Kimbro’s knowledge of the game and dedication to the program.
Kimbro was named head football coach following the Dec. 14, 2021 school board meeting. Johnson announced his retirement from coaching and education at the end of this school year.
When Coach Kimbro takes over the reins in the 2022 season, he will be the 10th head coach since 1974.
“I am very excited to have the oportunity to lead the Mattoon High School football program,” said Kimbro. “Leading a high school football program has been a goal of mine since I started coaching 18 years ago. I have had the great fortune of working for two of the best coaches in the area (Coach Gerald Temples and Coach Johnson) and I cannot thank them enough for everything they have taught me about leading a program and how to treat kids. I am very lucky that we have a bunch of great kids that will put in the time and effort to make this program a success.”
Johnson said Kimbro has not shied away from coaching responsibilities and opportunities to learn.
"Jarad will bring a lot of enthusiasm,” said Johnson. “He has been with me since I came to Mattoon. Jarad has experience in every aspect of the game. He is very loyal to the program and the Mattoon community. I believe he will do a great job. He certainly has been patient while waiting to get his chance to lead the Greenwave football team. I hope he has as many great memories as I do when it is all said and done.”
Trent Duckett, who will succeed Dave Vieth as athletic director at MHS next fall when Vieth retires, is looking forward to working with Kimbro.
“Coach Kimbro is a man of character, a leader, and a Mattoon guy,” said Duckett. “His commitment to the success and growth of Greenwave student-athletes over the last 18 years has helped to shape the goals he has for himself, his staff, and most importantly, his players. I cannot wait to see him lead his team to future success on the field as Greenwave football players, and more importantly to their success off the field as high character young men in our community.”
Outgoing head coach Johnson described himself as “one of luckiest people in the world” when he was offered the opportunity to teach and coach at Mattoon High School 13 years ago.
“I feel very fortunate to get up in the morning and look forward to going to work,” said Johnson. “I have never “had” to go to work. I “get” to go to work. The job I do allows me to meet many great people along the way. I have learned more from them than I have taught. Mattoon students, athletes, teachers, staff and administration have been an absolute joy to work with.”
Johnson has left quite an impression on not only the football program but on his work with students, staff and the community.
Kimbro praised Johnson for his professionalism on the field as well as his generous nature and kindness.
“There are not enough great things that I can say about him,” said Kimbro. “He has been a fantastic head coach, mentor and friend to me over the past 13 years. He is a genuine person that would give you the shirt off his back. He always has his players and coaches' best interest in mind when he makes decisions. He also is one of the smartest football people I’ve ever been around. He will be greatly missed by the players, but probably more by myself and the other coaches.”
Superintendent Tim Condron described Johnson as a leader both on and off the field. His work with student athletes was more than just building a solid football team. Coach Johnson’s goal of developing leaders who after leaving MHS would possess maturity, self-esteem and service to their community helping them to become successful adults.
“Coaching football has always been my obsession,” said Johnson. “Getting to watch the football players grow into young men is one of my favorite things. I have been proud of all the teams we have put on the field. I always knew our guys would play hard and give us everything they had.”
He added he has been fortunate to work with talented coaches and praised administration
“Dave Vieth (current, MHS athletic director) has always been my athletic director here,” said Johnson. “He has always been supportive and helpful. It is very important to be surrounded by good people and I have always had that here in Mattoon. I have so much love for Mattoon and the people here.”
Vieth applauded Johnson’s work with the Greenwave.
“Coach Johnson had five teams make the football playoffs five years in his tenure,” said Veith. “He has been a great leader for all of the players and coaches in the football program through his tenure.”
Vieth predicts Kimbro will continue to build on Johnson’s legacy.
"I truly believe that Coach Kimbro will do a great job leading the football program for many years to come.”
Johnson’s retirement plans are still uncertain, however, he would like to spend time with his family.
“I certainly don’t see me sitting around doing nothing”, said Johnson. “I look forward to coming and watching the Greenwave play in the new facility. It is going to be such a beautiful addition for a deserving community and school.”